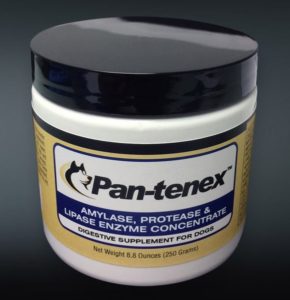 Pan-tenex users are “in-the-know” when it comes to pancreatic enzymes and the proper care of their pets.  They have come to appreciate the 10x potency, quality & consistency behind Pan-tenex that makes it the best enzyme for their pet.

For those that may use a different pancreatic enzyme, if you’ve noticed a new, strange odor and a significant price increase as of late then you are not alone.

Over the past months, we have fielded many calls from concerned users of other enzymes stating that their current product has developed an almost “cat-urine” like odor and a significant increase in price as well.

The almost over-night development of a strange odor and a rise in price is the end-result of certain market conditions taking place that we feel our readers should know about.

While other companies lack a thorough understanding of the enzymes they sell, we at Pan-tenex are industry professionals with the insight necessary to keep pet owners aware of market conditions that have a direct impact on the enzymes they purchase for their pets.

You see, pancreatic enzymes for pets, as well as some human digestion aids are made with varying strengths of pancreatin which contains the individual enzymes: Amylase, Lipase & Protease which you likely already may know.

The major producers of Pancreatin in the world are located in the European Union (EU), United States and in China.  China is among the largest producers, with a majority of their pancreatin being consumed domestically within their own country, as many world markets prefer the quality of EU & U.S. made pancreatin (pancreatic enzymes).

All world producers of pancreatin have one thing in common, they all make their pancreatin by extracting the enzymes from the pancreas glands of porcine (pigs).

The extraction of enzymes from these glands is performed using one of two methods. One extraction method uses a form of Alcohol and the other uses Acetone.  While the use of Alcohol produces pancreatin with natural odor characteristics, the use of Acetone always results in pancreatin having a foul, cat-urine type smell which is not accepted by many pets which require it for proper digestion.

All of China and some parts of the EU exclusively use Acetone in their extraction method.  While both methods are considered generally acceptable, using Acetone during the extraction process results in pancreatin that has a poor odor profile that cannot be consistently controlled.  Many times, pancreatin made via this acetone method appears as a fine powder and is typically used more in tablet & capsule applications where the odor can be hidden.

Alcohol is the preferred extraction method being used in parts of the EU and the U.S. which results in a more natural or odor-free grade of pancreatin that is granular in form and the best choice for dog & cat supplementation.  This method is also understood to produce pancreatin with higher enzyme potencies and Pan-tenex exclusively contains this grade of pancreatin which is manufactured via alcohol.

Starting in early 2020, a major outbreak of African Swine Fever (ASF) occurred in China’s domestic pig population and since then the Chinese government has had to euthanize (cull) a large majority of its own porcine herds to lessen the spread of this disease which has severely reduced the amount of pancreas glands available within China for their own domestic pancreatin production.

As a result, pancreatin factories in China who would normally source their pancreas glands locally, have been forced to buy them on the world-market putting them in direct competition with other major pancreatin makers.  This increased global competition has caused the cost of these glands to increase by as much as 200% in some markets.

The final result is that pancreatin makers must now pay more for the pancreas glands they use and this has directly resulted in increased pancreatin prices for new production across all world markets.

The U.S. price for domestic-made pancreatin has also increased because U.S. makers utilize domestically sourced glands which have always been the most expensive in the world and only continue to increase in-step with present world-market gland prices.

These price increases combined with reduced availability for U.S. domestic pancreatin, has recently pushed some canine enzyme products in the U.S. and Canada to switch their raw material source to overseas, acetone-based pancreatin which tends to be more available and somewhat cheaper in cost.

Complicating the situation further, some U.S. firms import acetone-based pancreatin from the EU or China and resell it in the U.S. & Canada where some firms use it and may not be aware of the odor issues associated with it.

So if your current pancreatic enzymes have developed an unusual odor and has increased in price lately, it is probably an acetone-based pancreatin made in some part of the EU or possibly China which is really not the most ideal product to be using for your EPI dog.

In addition, if you a have come across a new brand of enzymes with a strong odor, a fine powder and perhaps a cheaper cost than most, it is almost guaranteed to be an acetone-based pancreatin from China.

Frankly speaking, professional firms in the industry have long known that acetone-based pancreatin should never be used for dog & cat supplementation because many pets simply do not accept the odor of the product.

Those firms that would choose to use an acetone-based pancreatin for their product are either woefully inexperienced or are simply desperate to keep their product on the market during this current shortage of higher grade pancreatin.

In closing, a pancreatic enzyme only works if your pet will consume it on a consistent basis.  So knowingly using an enzyme that is acetone-based may not be the best choice for your pet.

Pan-tenex will never contain acetone-based pancreatin and you can always be assured of receiving the highest quality and consistency for your pet.

We are confident that your pet will respond well to Pan-tenex and invite you to please review our customer testimonials section. 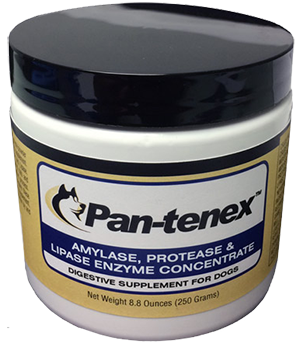